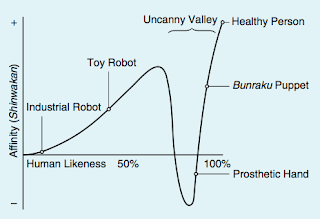 Mori’s concept of the ‘uncanny valley’ relates to how objects which are almost, but not quite human, create more of a sense of unease than those which are decidedly not human. Mori identified that when considering artificial human forms, humans tolerated, but did not particularly emotionally respond to industrial robots, but then began to show affinity and empathy for toy robots and good quality (anime and manga style) human-like but still visually artificial toys. However, their affinity fell as they encountered things like prosthetic hands and some actors’ masks which were more human in one way but caused more unease in the viewer. Many computer avatars sit squarely in this uncanny valley. Creating robots and other artefacts that were human enough not to cause unease would, Mori identified, be a major challenge.

As with the Turing Test it is useful to generalize the Uncanny Valley phenomenon and apply it to aspects of a virtual human such as movement or displays of emotion which, in some ways, might be more ‘accurate’ than those of less well developed systems but which are not realistic enough be to totally taken for a real human and so lie stuck in the ‘uncanny valley’.