California Law Bans Bots From Pretending to Be Human


Effective July 1, 2018 it became illegal for bots interacting with California consumers to pretend they're human if they're trying to sell goods, services, or to 'influence a vote in an election.'

https://uk.pcmag.com/news-analysis/117718/california-law-bans-bots-from-pretending-to-be-human
Posted by David Burden at March 21, 2019
Email ThisBlogThis!Share to TwitterShare to FacebookShare to Pinterest

Maggi and I attended the All Party Parliamentary Group on AI evidence session on AI in education on Monday. Some good presentations which raised some questions that I might write longer on later. Nicest bit was a shout-out for the book from Sir Anthony Seldon, author of The Fourth Education Revolution and Vice-Chancellor of the University of Buckingham.
Posted by David Burden at March 20, 2019
Email ThisBlogThis!Share to TwitterShare to FacebookShare to Pinterest


A journal paper that Maggi and I wrote last year on Digital Immortality and Virtual Humans and which was published in Postdigital Science and Education (2019) (1:87–103) is now available on-line through the Springer web site on this link.


The use of virtual assistants such as Siri that provide voice and conversational interfaces, the growth of machine learning techniques to mine large data sets and the rise in the level of autonomy being given to computer-controlled systems all represent shifts in artificial intelligence that are enhancing the creation of digital immortality. The growth of personality capture and levels of brain simulation as well as computationally inspired life after death may change the future of religion,affect understandings of the afterlife and increase the influence of the dead surviving in society. This paper provides an overview of recent developments in the area of digital immortality, explores how such digital immortals might be created and raises challenging issues. It presents the early findings from a study that created a virtual persona. This prototype system contains relevant memories,knowledge, processes and modelling of an individual’s personality traits, knowledge and experience and, also, incorporates the individual’s subjective and possibly flawed view of reality. It is argued that this system offers the possibility for the development of a persona that learns [and acts] post-death.

W3C has set up a Conversational Interfaces Community Group "to enable web developers to collaborate and share conversational experiences for a variety of domains. Most dialogue systems serve interactive experiences in their own domain specific language, causing a fragmented zoo of proprietary formats. For example, Google Home or Alexa do not share a common intermediate representation, which makes writing wide-spread content inaccessible to the mass audience. We study existing specs and design standards to harness proven techniques into common agreement. "

Posted by David Burden at March 08, 2019
Email ThisBlogThis!Share to TwitterShare to FacebookShare to Pinterest 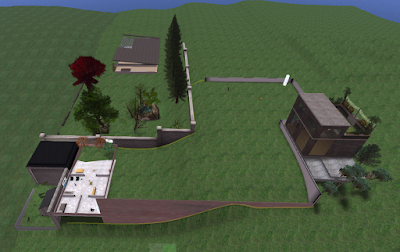 Just bought a new bigger bit of land in Second Life for our latest Halo experiments. The eventual aim will be to open this up to public access. The white area, lower left, is our current space, and the new area extends in the S shape up to the white pillar. The odd shape is due to the fact that I'm pretty sure that this now include my very first SL land purchase in 2014!

Next task is to build a house and garden for Halo to operate in, just as she did back in 2009!