From the literature it seems best to consider "creativity" as two elements:


Here are some examples of computational creativity which could be readily added to a virtual human.

At the defense, Dave thought that he eloquently summarized Chapter 3 of his dissertation. There were two questions, one from Professor Rodman and one from Dr. Teer; Dave answered both, apparently to everyone's satisfaction. There were no further objections.

Professor Rodman signed. He slid the tome to Teer; she too signed, and then slid it in front of Hart.

Later, Hart sat alone in his office, in his big leather chair, saddened by Dave's failure. He tried to think of ways he could help Dave achieve his dream. 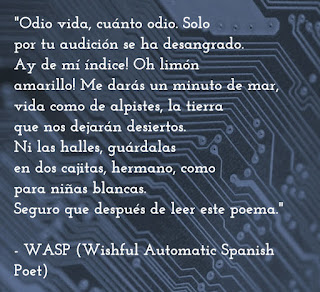 The current interest in affectively driven algorithmic composition (AAC) which uses computers to generate music with emotional or affective qualities, such as in the work of Williams (2015) and Scirea (2017), the latter with MetaCompose (presentation and demo at http://msci.itu.dk/presentations/primal/#/1).

Loughran and O’Neill (2017) analysed submissions to the International Joint Workshops in Computational Creativity over a period of 12 years  (IJWCC) and International Computational Creativity Conferences (ICCC) and identified that across 353 papers the most popular areas for computational creativity were Music,  Other (covering a range from Cocktails to Choreography), Imagery, and Language (including Story and Literature), with Games, Humor, Sound and Math further down the list.

If we ever do find something worth posting around artificial imagination we'll add it here!