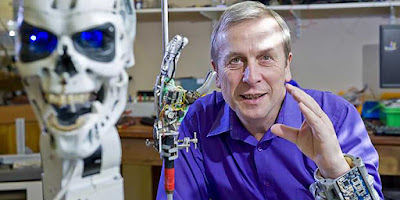 We've had a great endorsement of the book from Prof. Kevin Warwick who has done a lot of work  around AI and cybernetics (he was for a time known as the human cyborg as he had chips implanted to hook his nervous system up to computer and robotics systems!):

“This book presents an overview of the present state of play with virtual humans. Appearance, attributes, communication and intelligence are all investigated, and the architectures involved are covered in detail. If you have little knowledge of what a virtual human is, but want to find out, then this is the book for you. For researchers in the virtual human field this is a definite must.”

It arrived in time to make it onto the book cover! Many thanks to Prof. Warwick for his kind words.


Posted by David Burden at January 28, 2019
Email ThisBlogThis!Share to TwitterShare to FacebookShare to Pinterest 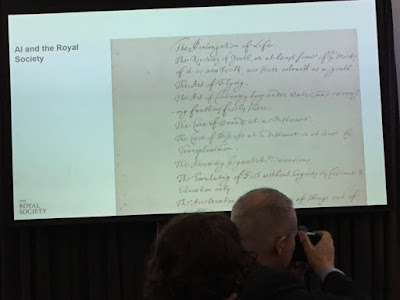 Just before Christmas I attended the TechUK Ethics & AI conference in London. It was an excellent event with great speakers and an knowledgeable and interesting bunch of delegates. "AI" was being interpreted more as machine learning than conversational AI/virtual humans, but here are a few of the key take-aways:

1) Kate Coughlan of the BBC presented some research they'd done on public attitudes towards AI - showing which areas excited people, and which they were wary of. Overall them seemed more wary than excited. Interestingly the notion of digital immortality came out as one of the few positives!

5) The RS presentation included an image from Boyle's notes (see image at top) which showed "extending life" as one of his top priorities - https://www.telegraph.co.uk/news/uknews/7798012/Robert-Boyles-prophetic-scientific-predictions-from-the-17th-century-go-on-display-at-the-Royal-Society.html

6) Luciano Floridi (https://twitter.com/Floridi) was the keynote. He has a useful 5 factor AI Ethics model which is based on a bio-ethics one.:

All in all a great day, and certainly going along next year.
Posted by David Burden at January 14, 2019
Email ThisBlogThis!Share to TwitterShare to FacebookShare to Pinterest

Great report on how AI is being portrayed and "pushed" by industry. Our AI Landscape model refers....

"UK media coverage of artificial intelligence is dominated by industry products, announcements and research, according to a new study by the Reuters Institute for the Study of Journalism. Coverage frequently amplifies self-interested assertions of AI’s value and potential, while positioning AI primarily as a private commercial concern and undercutting the role of public action in addressing AI."

https://reutersinstitute.politics.ox.ac.uk/risj-review/uk-media-coverage-artificial-intelligence-dominated-industry-and-industry-sources
Posted by David Burden at January 11, 2019
Email ThisBlogThis!Share to TwitterShare to FacebookShare to Pinterest

Happy New Year - and the Book Cover is out!

Maggi and I have been beavering away on the proofs, fixing typos, spotting grammar errors and handling the Author Queries. Just a few more to do, and then possibly a final review of the proof, generate the index and we're done!

The big news though is that we now have a cover thanks to Ahmed on DeviantArt. Everyone who's seen it thinks it's super-cool and really captures the spirit of the book. 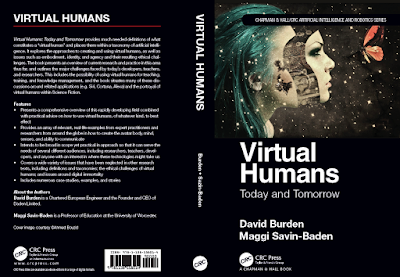 Check out Ahmed's other work too on DeviantArt.

We've also got a great quote from an early review to go on the back of the book - will hopefully share that next week as we start the countdown to publication on, hopefully, 8th Feb.